Year of Establishment: 1971, Damirchi Industrial Co. is a leading Company in Iran and in the Middle East in the field of edible oil production lines manufacturing, Back ground and support of this Company is having experienced specialists and using of the most up-to-dated technologies of this industry in the world. This back support has enabled Damirchi Co. that, beside offering consultation and professional design services to his customers, getting main share of the production lines manufacturing market as well in Iran and Middle East.
This Company is honored to provide a wide range of professional services and consultation for dairy, spray dryers and evaporation equipment, starch and glucose industries, beside the other activities for more than 50 years.

The main idea and  philosophy in Damirchi industrial Co.

The main idea and  philosophy in Damirchi industrial Co. for designing  edible oil machineries is using the best and up to dated technologies for reaching to the next 30 years vision of this industry in the world, so experts of this Company are trying: After oilseeds extraction, impurities and particles that have been mechanically entered into the crude oil will be removed by decanters or filtration, then, at the next step, edible oil will be degummed. Gums can be divided into two general types: hydrated by water and hydrated by acid. At the beginning, water degumming is done and the gums which can be hydrated with water, will be hydrated by injection of water and during retention time in its reactor, they will form in a separate phase with oil, which could separate from it by a centrifugal separator. These Gums are used for producing lecithin.

In the second stage of refining, by injecting phosphoric acid into the crude oil at a rate of about one kilogram per ton, all the remaining gums, which can be hydrated with acid, are also hydrated and form a separate phase. At the next step, caustic soda is injected into the oil; this injected caustic soda neutralizes the excess amount of phosphoric acid of the previous stage and also saponify all the free fatty acids in the oil which will form a separate phase as well. The amount of injected caustic soda at this stage is calculated by measuring the amount of free fatty acids in the crude edible oil and taking into account about 20 to 25% of excess one. There after injection of the caustic soda and passing it through the retention tank, the hydrated gums in the previous stage and the fatty acids which neutralized with caustic soda form a heavier phase than the edible oil and are separated from it by a centrifugal separator, which is called soap stock. Then, oil will wash with water by injecting hot water to the oil and mix completely with it to wash the remained soap from oil, this water is then separated from the oil by a separator as well. The water washing step could be repeated twice in the edible oil production line. At the last step, a vacuum dryer is used to separate the remained water in the oil after washing step, at last, oil is directed to the tanks of neutral oil.

Edible oil should has low and standard color, so by using bleaching earth under suitable temperature, vacuum and retention time, pigments of the oil, absorb on the bleaching earth and then this soil separated from oil by filtration, then bleached oil will send to bleached oil tanks for using at the next steps which is winterization, hydrogenation or deodorization.

This method is only required for sunflower oil that need to be packaged in transparent bottles. Sunflower oil contains a certain amount of waxes, which solidifies when the ambient temperature decreases and causes the appearance of the oil to become cloudy and opaque, which is considered as a negative point in the quality of the oil from point of customers view. To prevent of this unpleasant matter, sunflower oil is cooled to 5 ° C during 18 to 24 hours so that all the waxes and compounds with higher melting point are crystallized and solidify, so could be separated from the oil by filtration. To increase efficiency of this process, in two stages, filter aid soil is added to the oil, in first stage, to act as a source of wax production and crystal formation; in the second stage, it causes the fine wax particles to stick together in order to make larger particles and facilitate its filtration. After this step, the oil is sent to the filters that have already been pre-coated with filter aid, to separate the waxes and compounds with higher melting point from the oil and at the last stage, oil will send to the winterized oil tanks for next step which is deodorization.

This unit is the last stage and heart of the refining process in an edible oil production line, in which the remained free fatty acids in the oil, compounds that causes taste, odor etc. are separated from it and oil will be ready to be packed. It done, by increasing the temperature of the oil between 240 to 250 ° C, under a very strong vacuum of 1 to 2 mbar(a) and simultaneously injecting sparge steam to facilitate the escape of light compounds from the oil phase. Simultaneously with deodorization operations, processes such as: Thermal Bleaching (Increasing the temperature to decompose the pigments and decreasing color of the oil) could be performed by adjusting the deodorization parameters. The types of deodorizers which widely used nowadays in the vegetable oil industry could be considered as follows: In order to increase the melting point of vegetable oils and also to have more stability at higher temperatures, it is necessary to hydrogenate and remove the double bonds in the fatty acids composition. To achieve it, the hydrogenation with nickel catalysis method is used. The whole process of hydrogenation takes about 4 to 8 hours, depending on the type of process, and the reaction reactor is called a converter, after completing hydrogenation and reaching to required melting point, oil will cool and filtrate for separating main part of the used nickel catalysts, for separating rest of the nickel catalysts, oil will mix with filter aid and filtrate in a unit which named post bleaching. This method is used for palm oil family to separate different cuts of palm oil with different melting points. for this purpose, the oil will cool in special crystallizers which equipped with agitator and cooling coils to reach the appropriate temperature in the required time duration and so oil will divided into two phases of solid and liquid. Then it will send to the special membrane filters to separate the solid and liquid phases from each other. Further each of these phases has its own consumption and applications. the mechanism and hardware which required for the fractionation of palm oil and palm kernel are different, and each of these oils needs its special quipment and hardware. It causes transfer and replacing of different substitutions of the molecules on it, from different oily compounds, with each other, in the mixture and finally produces a completely homogeneous and uniform compound. This method is used only in special cases, such as the production of semi-hydrogenated oils with zero trans fatty acids, reducing consumption of palm oils in solid oils formulation and replacing them with soybean oil or other ones, simulating specific oil compounds or similar processes, it could be done chemically by using sodium methoxide or ethoxide as catalyst or enzymatically by using its special enzyme.

Execution path line of the projects:

By following most up-to-dated methods of executing projects in the world, Damirchi industrial Co. is the unique one for implementing edible oil projects in Iran and middle east, that uses of professional designing software for preparing all the drawings and documents in the Company from A to Z, before starting projects, for max. saving of Energy, time and being on schedule during installation and commissioning, in order to be able to deliver the projects just on time and with expected quality. 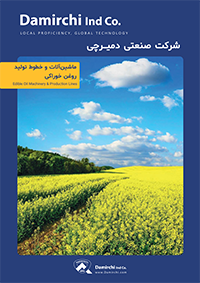 See The Latest Projects Of Damirchi Industrial Co. On Our social media

Damirchi Industrial Group, established its continuous and valuable work with the aim of improving the quality level and standards of operation in the field of designing, manufacturing, installing and setting up machinery and equipment in food, pharmaceutical and chemical industries

The Donyaye Eghtesad Newspaper interview with the Damirchi Group CEO, focused on bottlenecks in the production of industrial machinery